There were some nice surprises on the 3rd stage of the 11th Morocco Desert Challenge. Landscapes, running tracks, pleasant driving ... but also disappointments with punctures for some and navigation errors for others.

Variation was the key word to define what was awaiting the MDC competitors on this 375-kilometer special. The tracks were not as fast as the day before but more technical, rather a mix of what all Morocco can offer in rally-raid, without the dunes. The competitors were able to cross the Oued Draa several times, with some WRC games, a perfect playground for SSV and buggies. They could follow magnificent wadis for several kilometers before crossing a few chotts, dry salt lakes, where it was possible to test the power of the engine to the fullest.

The second part of the special gave them 50 kilometers of stony and typical Moroccan tracks with a lot of small bumps to overcome before moving on to new landscapes between valleys and mountains crossed by tracks slightly silted by the wind. A real pleasure for the pilots!

For a while it seemed that the third stage would get a surprising winner in the motorbikes, after the front runners lost track in group. However, they quickly caught up with the somewhat slower participants, so that Skyler Howes and Joan Pedrero again became 1 and 2, followed by Robbie Wallace and Betrand Gavard. Paul Spierings came in with the third time, but was given a penalty, so that he was classified as fifth. The Dutchman is still third in the rankings, behind the American and the Spaniard.

"I've been stupid," said Spierings. “We were in a riverbed and it was not indicated that we had to get out, but the compass course pointed up to the left. I drove up and stood there for a moment, looking at how to proceed, and I saw the others turn to the right. I went after them. We all drove 15 kilometres too far. If only I had followed my own path, instead of following the others, I would have been in the lead."

The mistake took a lot of time, about half an hour. "It was a difficult stage," said Skyler Howes, who was the first to go wrong. “The navigation errors took a lot of time and that is a pity. But on the other hand: it was a nice stage, no crashes, the bike in one piece, and it's only day 3.”

The third stage was won by Jean-Pascal Besson in the cars. In the second stage he had major problems due to a broken front axle of the Peugeot. As a result, he started in eleventh position, which brought him great benefits because he was able to avoid the mistakes that the front runners made. "We were able to overtake some competitors right away," Besson told at the finish. “At the lunch break we saw that Erik van Loon was way ahead, but that we were faster in time. We have driven wisely not to get flat tires and not to break anything. The navigation went excellent. I am very happy, especially after yesterday's disappointment."

Leader Van Loon was the first to arrive at the lunch stop, even ahead of the motorbikes. He also went wrong where the bikes massively lost the way, but was able to correct that error quickly, so that he was alone in the lead. "That meant that we had to set the trail for everyone else," said the Dutchman. “We made a mistake, and were running around in circles for 20 minutes before we found our way back. Because of that, we ended up behind a buggy and some motorbikes, which meant that we could no longer make speed.” Van Loon came in fifth at the finish, but retained his leading position in the rankings and even widened the gap, because his nearest rival Paulo Ferreira lost even more time.

Vincent Thijs came to the finish in third place. He liked the varied terrain of the third stage. "It was quite technical, with a lot of stones, but very nice", the Belgian thought. “We were able to maintain a constant fast pace, did not make any navigation errors and had no flat tires. I am very happy."

Around twenty sheep who just happened to be crossing the road have cost Ton van Genugten a possible stage victory. Because everyone was watching the sheep, Van Genugten and navigator Anton van Limpt overlooked a turn to the left. In a hurry to get back on the right route, the Team De Rooy driver made a small speeding offense, putting him at a penalty.

Until the lunch stop - at kilometre 251 of the 374 - everything went according to plan and Van Genugten was the fastest. The stage victory was up for grabs. “During the lunch break, we changed the rear tires preventively, hoping to prevent blown tires. On the stones, the tires wear out so quickly. Flat tires are a large part of the cause of our backlog in the rankings.” It was not enough, because a rear tire collapsed 15 kilometres before the finish line. That was after a farmer walking around with his sheep in a village, so they missed the path to the left, drove too far and thus lost the day's victory. With a one-minute time penalty, Van Genugten finished third.

The stage win went to MAZ driver Aliaksei Vishneuski, who passed Roeland Voerman when he made a navigation error. "The driving was tough, but the navigation was especially difficult," said Voerman. “There were quite a few awkward moments in which everyone was looking where to go. The MAZ had the advantage that it started a little later and thus he could benefit from the mistakes of others. We were leading, so he was able to pass when we made a mistake."

In addition to hard navigation, it was also tough when it comes to driving, the Veka MAN driver thought. "A nice stage, but a lot of steering and lots of holes and rocks, so that we were pulled apart by the shaking of the truck."

I made some navigational mistakes today, and lost probably about 45’, at least, very tricky navigation, lots of trails to choose from, I think everybody made mistakes, the ones some people made just didn’t cost them so much time; we also disappeared from the radar at some point, going out of a river bed, instead of paying attention to the CAP and going straight to it I just followed the trail, as I think many people did, then things became more difficult, as some of the cars caught us, and following them in the dust was way too bad, they were too fast on the straights and then we could almost pass in the twisty sections, almost. Tricky day today, we did a lot of navigation mistakes that cost us a lot of time, but day 3 is done, no crashes today, the bike performed well, plenty of racing yet to do, every day is a new day…

Very difficult day, overall; the first part of the stage showed very complicated navigation, there were a lot of tracks and it was difficult to find the right one. It was harder than usual to open the track today, as I did for many kilometers. Then I made a big mistake, which cost me a lot of time, but the pilots following me also did the same mistake, obviously, so at the end there was no big damage in terms of overall classification. Putting these mistakes aside, the stage went well, the bike keeps going smoothly, I feel well, and we will continue pushing tomorrow as we are doing every day.

A very, very, very hard stage today, the first 100 kms. were pure trial, it looked like a trial race, not rally-raid; after that, we had two big navigation mistakes, where we lost a lot of time, then we had two punctures, but here we are finally, which is what matters. I think tomorrow is when the race really starts, with the first dunes, it was warm-up just until today. I have to say that, after the hard first part, the second part of the stage, after the food, was fantastic, awesome tracks, where we could go really fast and had a lot of fun; of course we suffered in the first part, but this is the desert, it’s part of the deal, if we didn’t want to suffer we would to circuit races.

“Today was a beautiful stage with so many different landscapes. We drove carefully without taking any risk: I think the first special stages need to be well managed in order to obtain a good final result. Our Porsche is quite fantastic, my co-driver Luca made a perfect navigation even this third stage was simple, so it has been a nice day. Tomorrow we will at the turning point of this edition of Morocco Desert Challenge. I really like the friendly atmosphere you breathe here”.

“Amazing stage with nice landscapes and some difficult passage. During the first days I wasn’t feeling well but this morning I started driving quietly and with the desire to do my best. Umberto helped me in many different situations, I’m greatful to him because with his great experience I can improve myself. Tomorrow stage? I can’t wait to be at the start”. 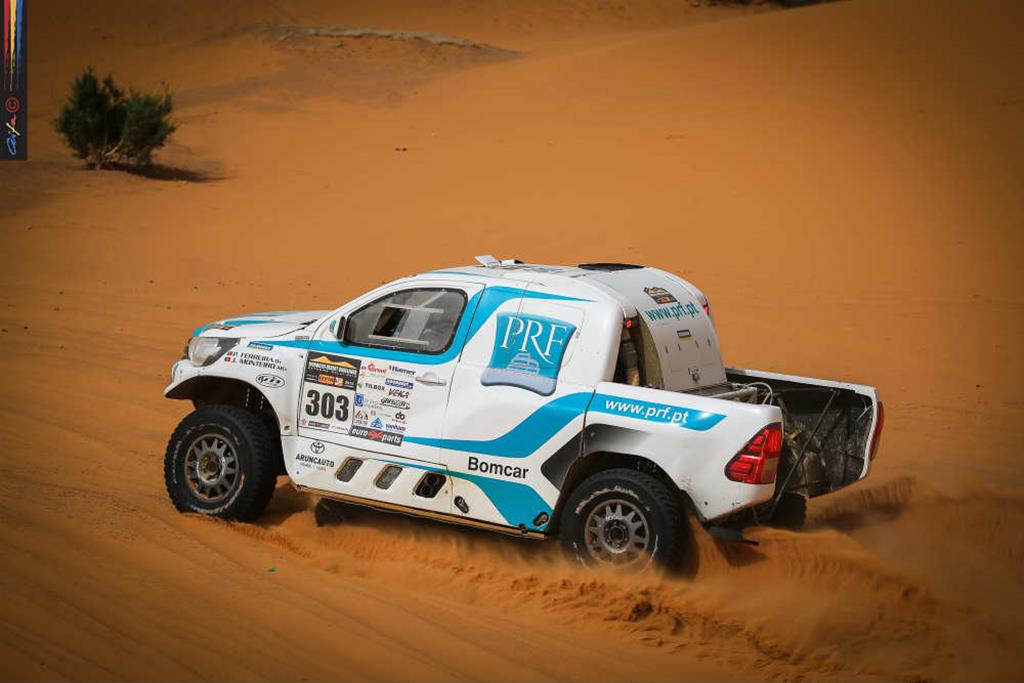