Dubai 24 Hours suspended because of the rain, with both Team WRT cars in the top-5

The Hankook 24 Hours of Dubai will go down in history as one of the shortest 24-hours races ever, as they were truncated by an unusual event in the Gulf region, rain! The race was eventually stopped after a very long red-flag period, with the final results published based on the 7 hours of real race achieved. The two Audi R8 LMS of Team WRT finished in the top-5, with Vanthoor-Mies-Vergers-Al Saud taking third in the MS7 by WRT car, and Bortolotti-R.Ineichen-van der Linde-M.Ineichen fifth. Both cars were always among the front-runners and took the lead at one moment during the race. 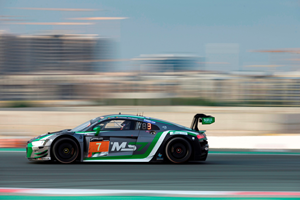