Fran Rueda and Andrés Saravia took their second win of the season today at Spa, after dominating Race 2. The BMW Team Teo Martín Motorsport pair rounded the day by jumping to second in the overall standings, where they now lie 12 points behind Mikkel Mac. It was a day for the BMW M6 cars, as Joel Eriksson and Richard Gonda finished second on the Senkyr Motorsport car, after an epic final battle between Gonda and Lourenço Beirão with the other Teo Martín BMW. The prospect of an all-BMW podium vanished on the finishing line, as the RS Ferrari of Daniele Di Amato-Andrea Montermini won the sprint for third. In the Teams’ standings, Luzich Racing and BMW Team Teo Martín are now tied up on 45 points.
In Pro-Am, Ollie Wilkinson and Brad Ellis, with the Optimum Motorsport Audi R8,  took their maiden win in the series, also in the closing laps, and so did Rinat Salikhov in the Am class after driving alone the Rinaldi Racing Ferrari.
THE RACE – Perfect start for poleman Rueda, while Eriksson has a poor start from first row. Rueda leads ahead of Khodair, Álvarez, Onslow Cole, Di Amato, Pierguidi, Eriksson and Rugolo. Everything goes smoothly except for a contact between Griffin  and Mul. The fight is between Onslow-Cole and Di Amato. Rueda pulls away, while Pierguidi takes fifth from Di Amato and shortly after passes Onslow-Cole for 4th. Positions stabilize with Rueda having a 3second gap over the pack, while Khodair sees his P2 threatened by Pierguidi, as the window for driver changes approach.
After all changes, Saravia leads, with 1”8 on Hahn and 6”5 on Beirão. Follow Montermini, Gonda, West, Pierburg, Ling and Venturini. Soon, a group is formed with Hahn, Beirão, Montermini and Gonda.

It’s the Slovak attacking first and passing Montermini and Hahn (lap 18). In Am, Salikhov has taken over the lead from Basso.
It’s full fight between Beirão, gonad and Montermini for P2. Hahn is 5th and first in Pro-Am, while Ling is the best-placed Lambo ahead of Venturini, Ellis (who is now first Pro-Am), Mac and Agostini.
The last couple of laps are breathtaking with Beirão and Gonda fighting fierce, and having a couple of door-to –door contacts at the Bus Stop. Gonda eventually passes the Portuguese, who will lose third in favor of Montermini in a last-minute sprint ahead of the finishing line. 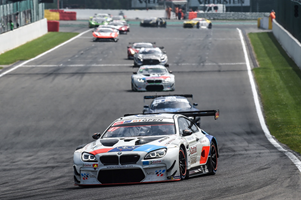