Monteiro, who suffered serious head and neck injuries in a testing crash in September 2017 and fought a long and arduous recovery, took the lead when Honda-powered KCMG team-mate Attila Tassi hit trouble with a spark plug issue, holding his nerve to the finish for his first victory since he triumphed in Hungary two years ago.

“God knows how much we worked for this,” said Monteiro. “The accident two years ago – you’ve no idea how hard we worked to come back. I always dreamed of this, but to actually do this… it’s unbelievable. I’m so sad for Attila who could have had his first win, but someone was watching out for me, just as they were in hospital. I lost focus in the last two laps – they were probably the hardest of my career.”

Behind the triumphant Monteiro, Yvan Muller finished second for Cyan Racing Lynk & Co with nephew Yann Ehrlacher joining him on the podium for the first time in a second Lynk & Co 03 TCR. Afterwards, Muller explained that it had been difficult decision to race following the passing of a team technician, who fell ill last night. Both drivers paid tribute following the podium, while a minute’s silence was observed on the grid before Race 2.

Following his Race 1 victory, Norbert Michelisz leaves Vila Real 25 points behind Esteban Guerrieri on the #RoadToMalaysia. Inaugural WTCR / OSCARO winner Mikel Azcona, who took the victory ahead of Ma Qinghua and Guerrieri in Race 2, scooped the TAG Heuer Best Lap Trophy. Ma had been leading but an error through the ‘joker’ lap cost him vital time.

RACE 3: MONTEIRO SCORES EMOTIONAL HOME WIN
Tiago Monteiro scorched to a dream home victory at WTCR Race of Portugal after seeing off a challenge from Yvan Muller in Race 3 in Vila Real. The KCMG driver, who has returned to racing this year after coming back from serious injuries incurred in a testing accident in 2017, was in tears on his slowing down lap after becoming the 11th different winner of the WTCR – FIA World Touring Car Cup presented by OSCARO season.

KCMG team-mate Attila Tassi led away from the DHL Pole Position, with Monteiro slotting in behind him as Muller passed his nephew Yann Ehrlacher on lap one to lead the Lynk & Co-powered challenge behind the two Hondas.

Tassi lost his lead on lap four when he began to slow, the 20-year-old eventually pulling in to retire. Muller played his ‘joker’ lap having just passed Tassi, with Monteiro following suit a lap later. The Honda just emerged ahead of the Lynk & Co, but it was close. From there, Monteiro pulled a gap to secure a dream victory in front of a joyful Portuguese crowd.

As Muller fell back from the leader, Ehrlacher closed up, the pair both coming under pressure from Race 2 winner Mikel Azcona in his PWR Racing CUPRA TCR. It seemed Muller was holding up the pair, but he held on to lead home a Lynk & Co two-three, with Azcona capping a great first weekend in Vila Real with a fourth to go with his earlier win.

Jean-Karl Vernay beat Rob Huff in a race-long duel for fifth, the Audi having beaten the Volkswagen off the grid.

Néstor Girolami claimed seventh for ALL-INKL.COM Münnich Motorsport, but his team-mate Esteban Guerrieri was out of luck. The WTCR / OSCARO leader was forced out after a first-lap collision with BRC Hyundai driver Nicky Catsburg, denting his advantage at the top of the table.

The other points finishers were led by Johan Kristoffersson in P11, from Aurélien Panis, Kevin Ceccon – paying back Team Mulsanne for repairing his Alfa Romeo after his big qualifying accident on Sunday morning – Mehdi Bennani and Gabriele Tarquini.

There was bad luck for Comtoyou Team Audi Sport’s Frédéric Vervisch, who retired from P11 with a suspension failure with just two laps to run.

The Spaniard started third in his PWR Racing Cupra TCR, but used the joker – a unique feature at the 4.785-kilometre Circuito Internacional de Vila Real – to pass both Esteban Guerrieri and DHL Pole Position starter Ma Qinghua. The win is also PWR’s first in WTCR / OSCARO and the first for the CUPRA brand this season. The result has also lifted Azcona to fifth in the standings on the #RoadToMalaysia.

Team Mulsanne’s Ma made a clean start after his clutch problems in Race 1 to lead in his Alfa Romeo Giulietta Veloce TCR, from fellow front-row starter and title leader Guerrieri, with Azcona running ahead of Nicky Catsburg, Jean-Karl Vernay, Rob Huff and Yvan Muller.

But the 'joker' lap changed the complexion of the race at the front. Guerrieri was the first to take it at the end of lap three, as Vernay, Muller, Yann Ehrlacher and Tiago Monteiro followed him. Azcona took his joker at the end of lap four, jumping Guerrieri who was now behind Catsburg.

Ma waited until lap six, but got his line wrong through the ‘joker’ lap as Azcona, who had already closed in on the Alfa, swept into a lead he would hold until the flag. Ma finished second ahead of Guerrieri, who added to his points lead.

Vernay finished fourth having gained a place on Catsburg with his joker, the Dutchman having left it late to take his alternative route. Muller was sixth after overtaking Huff with his joker, followed by Ehrlacher, Néstor Girolami and local hero Tiago Monteiro.

The BRC Hyundai N Squadra Corse driver led all the way from the DHL Pole Position to claim his second win of the season and close the gap to Guerrieri to just 15 points on the #RoadToMalaysia.

Although Michelisz had the pace to win on merit, he was also aided in his quest by Augusto Farfus in the sister BRC Hyundai N LUKOIL Racing Team entry. The Brazilian, who had qualified second, held back the pair’s nearest challengers, Yann Ehrlacher and Rob Huff, to allow Michelisz to open up a gap at the front following a clean start.

Michelisz, Farfus and Huff took their ‘joker’ laps – a feature unique to the 4.785-kilometre Circuito Internacional de Vila Real in WTCR / OSCARO – as early as possible at the end of lap three, but Ehrlacher waited a lap later – and it enabled the Frenchman to jump Farfus to claim second place.

But with Michelisz already clear in the lead, the Cyan Performance Lynk & Co driver had no chance to challenge for victory and finished second, 2.291s behind. Farfus completed the podium, with Huff in fourth for SLR VW Motorsport.

As Farfus had ahead of him, team-mate Nicky Catsburg held up the rest of the field in the opening stages while running fifth. He maintained his position after the ‘joker’ laps had played out to secure more points for the Hyundai N LUKOIL Racing Team.

Comtoyou DHL Team CUPRA Racing’s Aurélien Panis finished sixth ahead of SLR Volkswagen’s Johan Kristoffersson, who used his experience from the FIA World Rallycross Championship to take his ‘joker’ later in the race than his rivals. On this occasion it didn’t work out for the Swede, who neither gained nor lost a position and he finished seventh, just ahead of Thed Björk. Yvan Muller and Jean-Karl Vernay completed the top 10 at WTCR Race of Portugal.

ALL-INKL.COM Münnich Motorsport’s Néstor Girolami finished in P11, just ahead of Andy Priaulx, PWR Racing’s Mikel Azcona and Team Mulsanne’s Ma Qinghua, who made a slow start from fifth on the grid and immediately dropped down the order in his Alfa Romeo Giulietta Veloce TCR. Comtoyou Team Audi Sport’s Niels Langeveld was the final points scorer in P15.

The race proved an unhappy one for #RoadToMalaysia points leader Guerrieri. The ALL-INKL.COM Münnich Motorsport driver only started P16 after a sensor problem in qualifying, then endured a misfire in the race – allowing Michelisz to close that gap to 15 points from 45.

Home hero Tiago Monteiro was in a points-paying position when a collision with Gabriele Tarquini – who was rejoining the track at the time after completing his ‘joker’ lap – put him out on lap four.

Race 1: Norbert Michelisz (BRC Hyundai N Squadra Corse), Hyundai i30 N TCR
“The day started like dream with qualifying and here of course you have the inside starting from the first place, so I was really focused on the start. I think we were quite equal with Augusto and Yann and this was already 50 per cent of the job. Then I have to say we did a fantastic team job and I’m really grateful to Augusto. I managed to pull a gap, I was pushing 100 per cent, not leaving anything on the table and fortunately the gap was big enough on lap three to do the joker lap. I don’t want to say it was an easy race. After Yann did the joker and overtook Augusto I really had to push. There was one or two laps where I tried to slow down a bit, but then I saw he was taking big chunks out of the gap, so I was pushing again. So it wasn’t an easy race, but I’m incredibly happy. My target is to extract anything out of my possibilities. For sure we will not be in a position like this every race weekend, but if you are in this position you need to make the most out of it. I think today I also was a bit lucky. I don’t know what happened to Esteban in qualifying, but for sure 15 points is better than 45, but tomorrow is another day and let’s wait and see.”

Race 2: Mikel Azcona (PWR Racing), CUPRA TCR
“I didn’t expect to be standing here. At the beginning of the weekend I was thinking it would be a difficult weekend for us, first time here in Vila Real, a street track, a difficult track. To go fast here you need a lot of laps and a lot of confidence. But we improved a lot during the weekend. This morning during qualifying we did a very, very good lap. We improved a lot. The car was great and during the weekend we improved the car. I was with more confidence today. The race, it’s unbelievable to win here in Vila Real, this track, a very difficult track. I am with my people, my family, my sponsors. We did an amazing job in the ‘joker’ lap. We overtook two cars and the pace was great. I felt very confident with the car. It’s my first win in the WTCR and to be P5 in the standings is a good thing. We have a chance to win the championship. We need to continue in this pace. The championship is very long and we will see in Malaysia the position we have.” 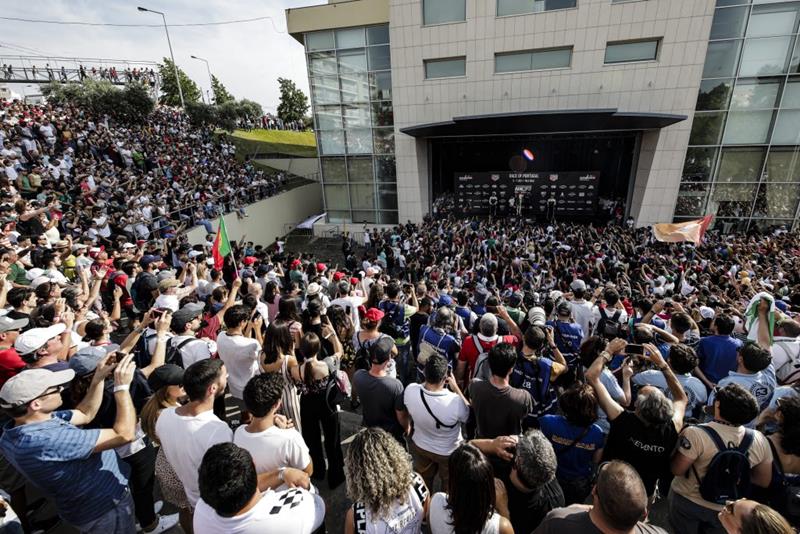