FIA WTCR Race of China: Race 1 report WTCR – FIA World Touring Car Cup presented by OSCARO 2019Rounds 19, 20 and 21 of 30, Ningbo International Speedpark, 13-15 September Yvan Muller and Ma Qinghua combined to make it a day to remember for local fans at WTCR Race of China with Muller winning in a Chinese-built Lynk & Co 03 TCR and Shanghai-based Ma pushing him all the way as he battled to claim a home win in the WTCR – FIA World Touring Car Cup presented by OSCARO. Muller, starting from the DHL Pole Position, held off a race-long challenge from home hero Ma Qinghua who couldn’t quite find a way past the Lynk & Co 03 TCR in his Team Mulsanne Alfa Romeo Giulietta Veloce TCR. Frenchman Muller made a strong getaway from the DHL pole as PWR Racing’s Mikel Azcona challenged Ma, but it was the Chinese driver who had the performance to push the leader. Ma kept Muller under pressure all the way to the flag in the 13-lap race at the Ningbo International Speedpark. “That was far from easy,” said Muller, whose victory was his first of 2019. “Ma gave me a hard time. At one point I asked my engineer how many laps to go and he said six. I said, woah, that’s a way to go. So, I had to get my head down.” Muller was particularly pleased to end his season win drought at Ningbo. “Lynk & Co are based 10 minutes from here, so this was the one to win,” he said. Meanwhile, accepting the winning trophy for Muller’s team, Cyan Racing Lynk & Co, was Victor Yang, Vice President of Communications at Zhjiang Geely Holding Group. Azcona completed the podium for PWR on his Ningbo debut, but the CUPRA TCR only just held off a late charge from WTCR / OSCARO title challenger Norbert Michelisz. Fourth place for the BRC Hyundai N Squadra Corse lifts him to just nine points behind series leader Esteban Guerrieri. The ALL-INKL.COM Münnich Motorsport driver endured a disastrous race after he accidentally triggered his fire extinguisher on the grid. That forced the Honda Civic Type R TCR, which was supposed to line up in P12, to start from the pitlane. Although the Argentinian rose to P19 in the race, that meant he failed to add to his season points tally. Nicky Catsburg followed Michelisz home in fifth in his Hyundai, ahead of Comtoyou DHL Team CUPRA Racing’s Aurélien Panis who got the better of Augusto Farfus for sixth. A poor first lap dropped SLR Volkswagen’s Johan Kristoffersson from fifth on the grid to eighth and that is where he finished. Comtoyou Team Audi Sport’s Niels Langeveld and SLR VW Motorsport’s Rob Huff completed the top 10, the Briton rising from P16. Comtoyou Team Audi Sport’s Frédéric Vervisch got the better of Andy Priaulx for P11, then held off a trio of Lynk & Cos to the flag. Priaulx was ordered to drop behind team-mates Thed Björk and Yann Ehrlacher. Néstor Girolami was the final points finisher in P15. Inaugural WTCR / OSCARO title winner Gabriele Tarquini and PWR’s Daniel Haglöf, who had started P10, were the only non-finishers. Both pitted at the end of the first lap, Haglöf with visible damage to the front of his car. WTCR Race of China continues tomorrow (Sunday) with Second Qualifying from 09h00 local time followed by Race 2 at 14h30 and Race 3 at 15h50. 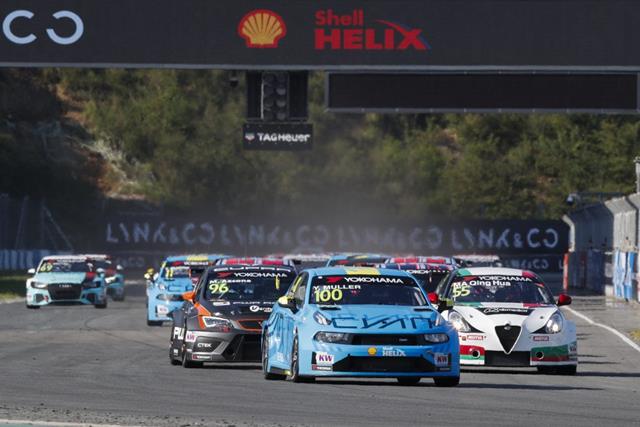