What’s coming?
Brittany. Bretagne. France’s far north-west. And Lohéac, a great place to race World RX. Petter and Johan have won three of the last four World RX of France events and our defending world champion arrives chasing a third straight success.
The PSRX Volkswagen Sweden objective is a simple one, to increase the lead in both the drivers’ and teams’ championship. As ever, we’re completely aware of the intensity of that task in the face of such competition – especially the competition from local heroes Peugeot and Sébastien Loeb.
Johan’s in town chasing a seventh win of the year, a result that would equal his own record from 2017.

Pernilla, Peugeot’s been really strong this season – how much do you fear the 208 ahead of its home race?
PSRX Volkswagen Sweden team principal Pernilla Solberg
“I’m not sure fear is the right word. We don’t really have fear for anybody, but we do have a huge amount of respect. Peugeot has a really strong car and, of course, with Sébastien [Loeb] and Timmy and Kevin [Hansen] they have three of the best drivers in the championship.
“But PSRX Volkswagen Sweden has real belief in what we’ve got too.
“As a team, we love coming to France. It’s really a fantastic place to race. People talk a lot about Sweden and Höljes’ magic weekend, but France is just as special – and, being Swedish, it takes a lot for me to say that! What I love about Lohéac is the way the fans just love the sport, they cheer for Petter and Johan almost as much as they cheer for Séb. Almost! It’s sure that Peugeot will be strong this weekend, like it is at every World RX weekend. We’re looking forward to the racing and the rivalry, but we’re also really looking forward to the passion and atmosphere these fantastic fans make.”

Johan, you’re clearly good at dancing in the (French) rain – fancy more of the same this weeked?
Johan Kristoffersson, defending FIA World Rallycross Champion
“It’s true! The last two years when I won in Lohéac it was raining and maybe the rain gives us a small advantage over the Peugeot.”

In a break with tradition, here’s another question for you Johan: why does the rain give you an advantage?
“The Volkswagen Polo R Supercar is fantastic in those kind of conditions where grip is a little bit more limited. I have such a good feeling with the car when we’re sliding. Normally in Lohéac there’s not so much gravel; it’s strange, it’s brown, it looks like gravel and dirt, but actually when you get there in the dry it’s giving you some more grip. So when the rain comes, I think it helps us.

Now we’ve had two, we might as well have three questions: what’s the strategy this weekend?
“Three questions! Does this count as overtime? The strategy is to stay out of trouble. In the last couple of races I have really tried to do this, pushed to get myself in the best possible position; a position where I can control my own race and do my own thing. This is what I want to do this weekend. With the championship like it is, I don’t need to take the biggest risks, I need to defend my position and help to strengthen the PSRX Volkswagen Sweden position in the teams’ championship.”

Petter, you’re going to your old adversary Sébastien Loeb’s backyard this weekend, how much would a win there mean?
Petter Solberg, PSRX Volkswagen Sweden team owner/driver and triple FIA world champion
“A win anywhere means everything, but the rivalry with Sébastien [Loeb] is a healthy one, like it’s always been.
“It’s funny how things change down the years. When we were both in the World Rally Championship, Sébastien and I were fighting hard. We were both at the start of our career, OK I was maybe a couple of years ahead of him, but we were pushing hard; we were young and really trying to find success and to find our way to the top in the sport.
“Things are a bit different now. We’ve both won some world championships – admittedly he’s still got a few more than I have, but I’m working on that! But we’re more relaxed about the pressure and everything that comes with the sport. Don’t misunderstand me, we both want to win and we’ll push like hell for that, but the relationship with Séb is really nice. We can talk about what we did a few years ago, enjoy each other’s company and then we go out and fight for the first corner. I love this.
“Like Pernilla says, Lohéac is such a good place; you get a real feeling that the fans appreciate the sport of rallycross. I won the first ever World RX round here in 2014 and the response from the crowd was unbelievable. I don’t forget that.” 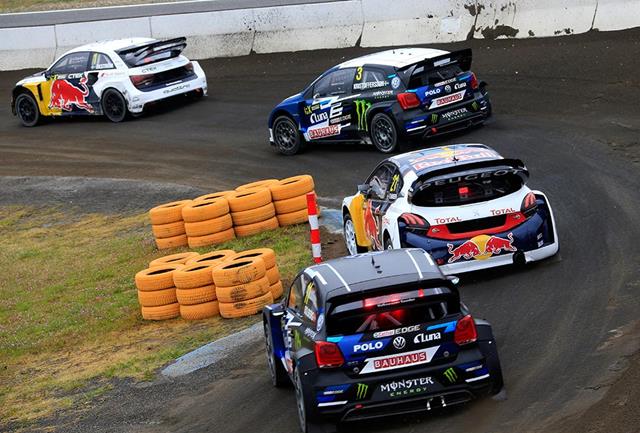