Former world champion Timmy Hansen has confirmed his return to the FIA World Rallycross Championship with the family-run Hansen World RX Team this year, as he sets his sights on reclaiming the coveted Drivers’ crown.

The eldest son of Kenneth Hansen – the most successful rallycross driver in history, with 14 European Championship titles to his name – the 29-year-old has been a stalwart of World RX since the series’ inception back in 2014 and indeed is one of only three competitors to have entered every round to-date, achieving ten triumphs and 32 rostrum finishes behind the wheel of a Peugeot 208.

Victory in Italy and three further podium appearances propelled him to fourth in the points table in his maiden campaign at the pinnacle of the discipline, with three more wins following in 2015, elevating Hansen to the runner-up spot in the standings.

The Swede prevailed in Canada in 2016 and reached the rostrum in half of the events that season, going on to add another four podiums to his tally in 2017 and two more in 2018.

His 2019 campaign was his most accomplished to-date, recording four victories from ten starts to secure both the Drivers’ laurels as well as the Teams’ trophy for Team Hansen MJP alongside his younger brother and team-mate, Kevin, clinching the crown in dramatic style in the South African finale.

Last season resulted in another four visits to the rostrum en route to third in the final classification, and after signing off with his tenth career success and a second-place finish in Catalunya, Hansen is eager to maintain that burgeoning momentum when the 2021 campaign gets underway at the same circuit on 23/24 July. Subsequent race weekends in Germany, Sweden, France, Latvia, Belgium and Portugal complete an eight-round schedule.

“In the last few years since we’ve become a fully independent family team, being on the grid each season has never been a given. I’m very grateful I have the opportunity to come back and race again this year. I love rallycross – it’s always been part of my life, and it still is in a very big way. We run the family team every day and our involvement with rallycross goes back decades. It’s been in my blood since I was born, so I’ll always want to compete here.

“Even though this will be my eighth season in World RX, I’m as motivated as ever to write a new story: will we fight for the title, who will be fast this year, and how will we stack up? We’ve been working really hard and the car feels much better now than it did in 2020. All the great ideas and talented people working with us have made a big difference, even as a small team that’s improving step-by-step. We might have a good shot at competing for the title this year, but let’s see how it goes!”

“Timmy is a world-class driver – and a world champion in rallycross, of course – so we are very happy to be in a position to keep him with us again in 2021. Having him alongside Kevin to continue the strongest driver pairing in World RX was always our target.

“He is giving himself new experiences and new challenges with his Extreme E campaign, and we know this new adventure is very important to him. We are lucky that he is able to do both that and World Rallycross, as he makes such a big difference to our team. It’s also great that we have two drivers who know our car inside-out, and that Timmy can maintain the momentum he had in the second half of last season.” 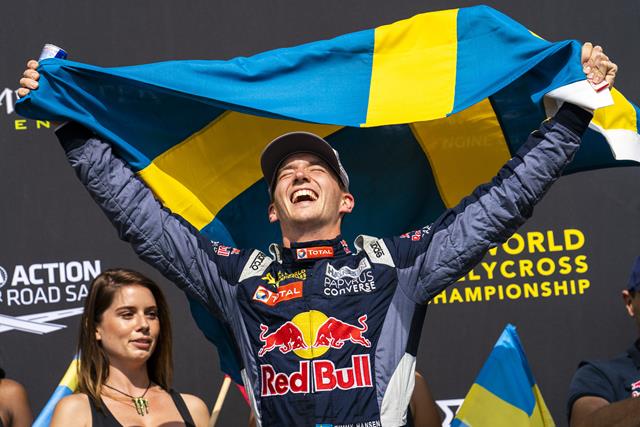