Kristoffersson turns up the wick with sparkling Spa success

Three-time world champion Kristoffersson had never competed around the challenging Ardennes circuit prior to this weekend, but the KYB EKS JC ace did not let that hold him back. Second in the intermediate classification after the qualifying stages, he proceeded to win his semi-final before sprinting away from his pursuers in the all-important final to cap a near-perfect score that has carried him to just 12 points adrift of the summit of the Drivers’ standings.

Compatriot Kevin Hansen kept his own title aspirations on-track with a solid run to second in his Hansen World RX Team Peugeot 208, with a delighted Krisztián Szabó claiming the maiden podium finish of his World RX career in third. The Hungarian has reached the final in every round to-date this season, and produced a defensive masterclass behind the wheel of his GRX-SET World RX Team Hyundai i20 to keep Timmy Hansen, Enzo Ide and Anton Marklund at bay right to the chequered flag.

Championship leader Hansen won the first semi-final, but was penalised for contact at the hairpin that eliminated Top Qualifier Kevin Abbring. The Dutchman was on outstanding form at his ‘local’ track and deserved far more for his efforts than a DNF, but he proved that both he and Unkorrupted will be a force to be reckoned with over the remaining three rounds.

Ide celebrated a fifth-place finish on home soil, ahead of Marklund on his debut in Hedströms Motorsport’s Hyundai i20. There was disappointment, however, for Riga winner Niclas Grönholm – forced wide at the start of the second semi-final – and Timo Scheider, whose ill-fortune persisted as suspension damage curtailed his charge.

“It feels fantastic to win here. I was comfortable pretty much from the start, and having not been to Spa before, I think it probably helped me that the track surface was a bit different compared to 2019 as it meant the others didn’t have so much of a headstart.

“Our pace in both the semi-final and final was mega and every time you’re on the top step of the podium, you just want to enjoy the moment because you never know when you’ll be there again. Overall, we’ve made a good points gain in the championship so I’m very happy.”

On his 30th birthday today, Andreas Bakkerud was crowned FIA European Rallycross Champion for the third time in his career – and the first time in the headlining Euro RX1 category.

Bakkerud and Fabien Pailler have waged a nip-and-tuck duel for supremacy season-long, and the pair entered the final in Belgium separated by just a single point in the Norwegian’s favour. A lights-to-flag victory – his first of the campaign – cemented a hugely popular title triumph for Bakkerud, as Pailler followed him home to seal the runner-up spoils and Jānis Baumanis in the second ESmotorsport Škoda Fabia completed the top three in both the event and the championship standings.

“This is absolutely crazy! I owe ESmotorsport a big ‘thank you’ for giving me the opportunity to compete in Euro RX1 this year – it really didn’t look like that would be happening before the start of the season. Everybody in the team has done such a great job. I’m very proud of them all, and there’s more to come. Hopefully we have an even brighter future together.”

In the FIA RX2e Championship, Guillaume De Ridder sent the partisan fans home happy with his second victory of the season after a hard-fought battle with chief title rival Jesse Kallio. The Finn was fastest on day one, but the Belgian hit back on day two, and a better launch in the final saw him grab a lead that he would not subsequently surrender.

The win has increased De Ridder’s advantage over Kallio in the title standings to nine points with only one round left to run. Isak Sjökvist rounded out the rostrum in third ahead of impressive newcomer Klara Andersson.

Yury Belevskiy has placed one hand on the Euro RX3 trophy following his third triumph of the 2021 campaign at Spa, as his closest competitor, Volland Racing team-mate Kobe Pauwels, endured a troubled weekend on home turf, enabling the Russian to extend his championship lead to 24 points with just 30 remaining to play for. Marat Knyazev and Damian Litwinowicz joined Belevskiy on the Belgian podium.

There is no rest for competitors in the FIA World Rallycross Championship, with round seven of the season – Cooper Tires World RX of Montalegre – coming up next weekend (16-17 October). 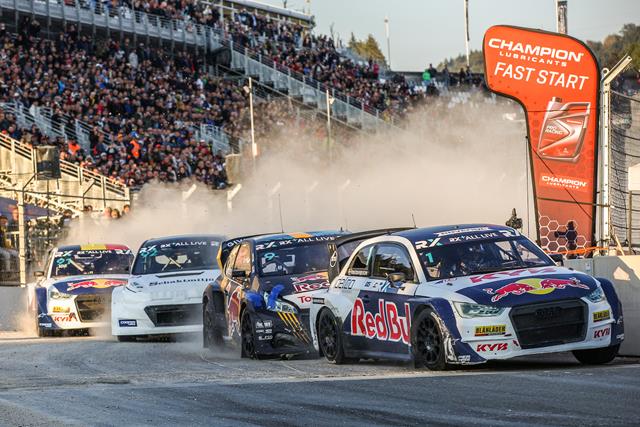