European Champions ESmotorsport to step up to World RX in 2022

ESmotorsport was founded by ex-racer Ernestas Staponkus, who competed against the cream of the crop in Euro RX’s Super1600 category and claimed a podium finish in Germany in 2014 before hanging up his helmet two years later to focus on establishing the team that now bears his initials.

The Lithuanian outfit entered the World Championship for the first time in 2019, with Kevin Abbring notably piloting its Škoda Fabia to fourth place in both Norway and Sweden that summer. Former FIA European Rallycross Champion and World RX event-winner Reinis Nitišs climbed behind the wheel for the double-header in Riga last year.

In 2021, the team has run Bakkerud and Jānis Baumanis in Euro RX1, the Latvian famously winning on home soil last month and the Norwegian clinching the coveted crown at Spa-Francorchamps at the end of a nail-biting season-long battle – although the primary aim of its combustion-engined activities was always to accumulate experience before embarking upon World RX’s exciting electric era, which is Staponkus’ overriding passion.

ESmotorsport joins Kristoffersson Motorsport (KMS) and ALL-INKL.COM Muennich Motorsport in confirming its 2022 World Championship plans. Fourteen kits have already been reserved from pioneering Austrian firm Kreisel Electric, the company behind the cutting-edge RX1e car set to truly electrify World RX next year, with faster acceleration and greater performance than ever before courtesy of 500kW delivered to the twin motors – equivalent to 680bhp – and 880Nm of instant torque.

“After long internal discussions, we are excited to confirm that ESmotorsport will enter World RX in 2022. Even just a couple of years ago, it seemed inconceivable that we would have this kind of evolution in rallycross but here we are, with a brighter future just around the corner and we are excited to be a small part of this big transition.

“The results that we have managed to achieve in Euro RX1 this season ignited a new fire for us to fight amongst the most skilled and experienced competitors in the world next year – and whilst that will clearly not be easy, we are more than up for the challenge.

“We believe that the new promoter alongside the FIA,  Kreisel and the other teams are doing a fantastic job looking at ways to make improvements for 2022, and Ernestas [Staponkus] is delighted by the decision to make the championship more sustainable – not to mention the awesome new RX1e beasts. Jaws are definitely going to drop when people see these cars on-track...”

“It’s great to welcome ESmotorsport back to World RX. Ever since the team first entered the championship, it has demonstrated first-rate commitment and professionalism, and its success with both Andreas Bakkerud and Jānis Baumanis in Euro RX1 this year – up against an extremely tough field – proves it possesses all the necessary qualities and credentials to shine at the very highest level.

“Ernestas [Staponkus] has long been a leading advocate of electric technology and greater sustainability – which is entirely in keeping with our core values as promoter of the World Championship. It’s fantastic to have his team on the grid for what is fast shaping up to be a spectacular season of rallycross in 2022.” 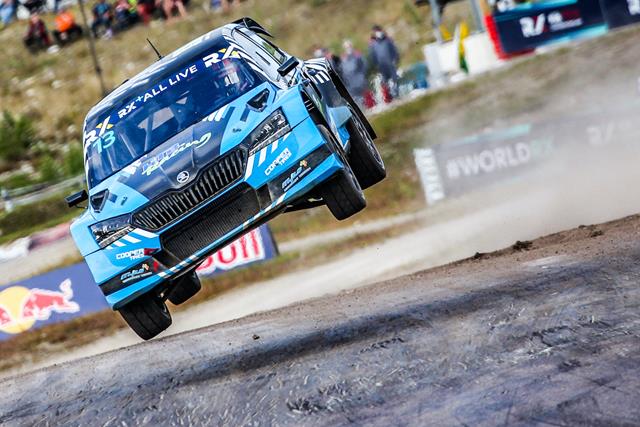