Anton Marklund produced a commanding display to triumph in the 2022 Euro RX1 curtain-raiser at Nyirád this weekend (21-22 May), as Kobe Pauwels dug deep to draw first blood in the Euro RX3 battle in front of a large and enthusiastic Hungarian audience.

Absent from the FIA European Rallycross Championship calendar since 2013, Nyirád’s return to the schedule was eagerly anticipated – and the high-octane action did not disappoint, as drivers relished the challenge posed by the ‘Red Cauldron’, so-called because of the distinctive colour of its gravel, having been built on the site of a former bauxite quarry.

As their confidence increased, competitors threw their cars around with increasing abandon – none more successfully than Marklund, who set the pace in all three Heats and went on to win his Progression race, Semi-Final and then the all-important Final to tally maximum points as he seeks to add a third career crown to the ones he clinched in 2012 (TouringCar) and 2017 (Supercar).

“I’m very happy to start the season in this way,” reflected the 29-year-old, making his maiden appearance with the SET Promotion team. “I love this track – it’s everything that a rallycross circuit should be – although everything got quite tight in the end as the grip level increased, and I wasn’t able to take as big a step forward as the others.

“I knew they were hunting us, and I really felt the pressure before the final. I was a bit angry after the semi-final because I knew my driving hadn’t been spot-on, so I said to myself, ‘now we make this happen!’ I pushed as hard as I could in the final – that was more-or-less everything we had to give. When I signed with SET Promotion, I was confident we had a good package so it’s a great feeling to prove that by winning here. It means a lot.”

Drawing upon all the knowledge and experience he gained driving alongside multiple world champion Johan Kristoffersson in World RX last year, Enzo Ide was Marklund’s closest rival throughout, as the ex-circuit racer underscored the huge improvements he is making by chasing the Swede home in the final.

Series returnee Ulrik Linnemann secured the third spot on the rostrum with a typically gritty, never-say-die performance. The Dane languished in 18th position on Saturday night after a troubled opening day, but raced up the order today and was the architect of the launch of the weekend in his Semi-Final as he fired his Ford Fiesta all the way around the outside of his adversaries from fifth on the grid into the lead.

Jānis Baumanis had looked to be podium-bound on his maiden outing in #YellowSquad’s Peugeot 208 until a loss of power in the final dropped the Latvian to fourth, while Sivert Svardal’s hopes of picking up some silverware were scuppered when the reigning Cooper Tires ‘Rookie of the Year’ pulled off the circuit on lap two.

Elsewhere in the 20-strong field, Patrick O’Donovan placed an excellent fourth in the intermediate Ranking and was running second in his Semi-Final before picking up a puncture, dashing his dream of reaching the Final on his Euro RX1 debut. That did not, however, take the gloss off a tremendously impressive performance behind the wheel of his ageing Ford Fiesta.

Six-time Andros Trophy winner Jean Baptiste ‘JB’ Dubourg was similarly amongst the front-runners, but a couple of spins cost the Frenchman dear, while Anders Michalak was a consistent contender in only his fourth Euro RX1 start. Home hero Tamás Kárai, meanwhile, put on a spectacular show for the partisan supporters, missing out on a berth in the Final by less than two seconds.

In Euro RX3, Pauwels – last year’s runner-up – entered the weekend as the favourite, but it was Škoda star Jan Černý who stole an early march by leading the way in the Heats, with the pair briefly clashing in the third of them when Turn One contact left the Volland Racing Audi momentarily in the barriers.

Pauwels and Černý continued their fierce duel throughout the weekend, but it was not until the very last  lap of the very last race that the Belgian succeeded in turning the tables, overhauling his Czech rival almost within touching distance of the chequered flag.

“Unbelievable!” reflected an emotional Pauwels. “After the first and third Heats, things looked really difficult for us, but with the support of my team and my family, we made it work. It was never easy because the other guys were quick and I knew I only had one lap to make the difference, but from our pace in clean air earlier in the weekend, we knew we were faster. To win with so much pressure on like that is just amazing!”

The 2022 Euro RX campaign will continue on 2-3 July at iconic Swedish circuit Höljes, which will additionally play host to the opening round of the FIA RX2e Championship and the Official Launch of World RX’s new electric era.

Copyright-free images are available for media download via the World RX Newsroom on the Red Bull Content Pool.

Full results can be found at www.fiaworldrallycross.com 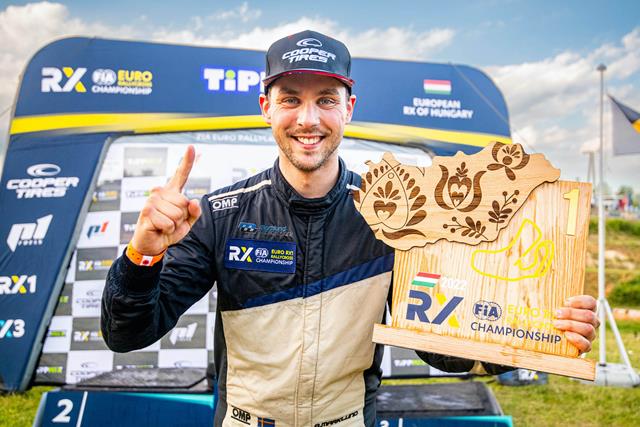