The Magic Weekend. A Saturday and Sunday like no other in Sweden; a weekend when 103,200 feet dance the days into the night and the night into the late night.

There’s always magic at World RX of Sweden, but when a Swedish driver in a PSRX Volkswagen Sweden Polo R Supercar wins, the magic moves to another level. Johan Kristoffersson put 51,600 fans under his spell as he delivered the perfect drive at the perfect track, waving his wand over Höljes to turn his Sunday special for the fifth time this year.

Johan began his home race the same way he finished World RX of Sweden three weeks ago: fastest. The defending champion was on sublime form to scorch through a scorching Swedish Saturday at the top of the table.

Not since Timmy Hansen won second qualifying at World RX of Great Britain on May 26 has Johan lost a session of World Rallycross. But if there was one man who could stop him, it was his three-time World Champion team-mate Petter Solberg. And Hollywood did just that on Sunday morning, turning in a perfect session to edge Johan and win Q3.

The pair of PSRX Volkswagen Sweden Polo R Supercars were unbeatable through qualifying and moved into the semi-finals first (Johan) and second (Petter), ensuring them of the perfect approach for Sunday afternoon’s action.

Johan won from pole position in the first semi and Petter was on for an identical result in the second race when his Polo suffered a technical problem, forcing him out for the rest of the weekend.

And the final? Johan did what Johan does. He won and he won in fine style with some more lights-to-flag brilliance. Five from six for the king of Sweden.

Johan Kristoffersson (SWE) #1
“There’s nothing quite like racing at home – except for winning at home. When I won my home round for the first time last year, I knew I would never forget that feeling and I really wanted it to come back again today.

“You definitely get a real boost from the fans in the grandstand – even if a few of them might have been cheering for some of the other Swedes around here! I love this track and these fans. And I love this team – it’s their home race, so a win is special for them too.

“I didn’t feel the car was completely perfect for me on Saturday, but as the second day progressed it just got better and better. In the semi, it was absolutely perfect. I felt so comfortable, I could just push and push and really work the car. In the final I would say the tyres were probably a little bit hot towards the end of the race, but by then I had been able to just keep inching forwards and away from the chasing pack.

“I got a really nice start, the launch hooked up and we flew off the line and into the lead. That got me the Monster Super Charge Award, I’m happy with that – my first since France last year! From then on I was just completely focused on every apex to make it happen and to build a lead. I did that.

“I’m so happy with another win and so happy for the team – but I want to say I am sorry for Petter. I missed my team-mate, he should have been along side me on the front row. But for me this is another 30 points and another really strong result for the championship.”

Petter Solberg (NOR) #11
“I have been disappointed before in my career, but I don’t know if I can remember a time when I am more disappointed than this. This one really hurt so bad.

“I had the race in my hand, we were going directly to the final where I wanted a win. I wanted it so much.

“Coming out of one corner, something wasn’t right with the car, I pulled over and that was the end. There’s nothing more to say.”

Pernilla Solberg (PSRX Volkswagen Sweden team principal)
“Firstly, we have to be so, so proud of what Johan has achieved today. Another win at home, another maximum score, another fastest lap and, of course, another win to boost his lead in the championship.

“To do this in front of his home fans at the team and his own home race is very, very special. He drove so well, he deserved this one.

“At the same time, I think we’re all quite sad for Petter. He gave this weekend absolutely everything. He was the only guy able to beat Johan and he’s leaving the track without anything in his pocket. That’s so, so tough for him and really not what he deserved after what he’s given the team.

“We’re into the mid-season break now. We have five weeks before we start the second half of the year in Canada and we will be using that break to work more with the car. I know Volkswagen Motorsport has some small upgrades coming and, of course, we’re going to be working flat-out on our strategy for the next six races.

“We have laid the foundations for an incredible season, now we have to build those into something beautiful in the second half of the year.”

Volkswagen R performance fact of the weekend:
The PSRX Volkswagen Sweden drivers’ reaction times were so close in qualifying; the difference between Petter and Johan was half the time it takes to blink! 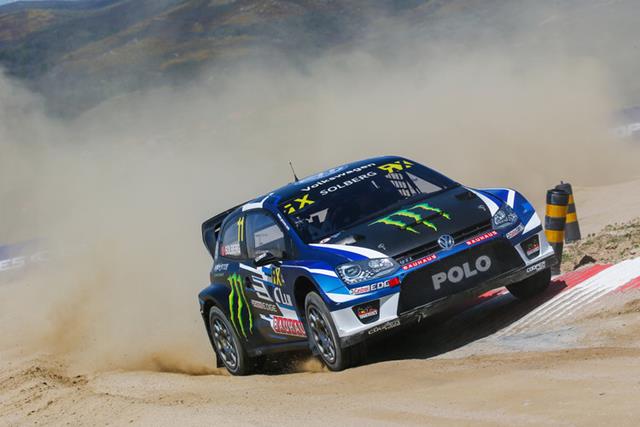