From Brescia (Italy) the team and the 2019 winnign rider that return to Monaco-Dakar, where from 7th to 19th of January he will cover over 6500 km on 12 stages in the Sahara’s african sand on board of its official Yamaha 450 WRF.

The “Angelo Caffi Squadra Corse” will stand alongside Alex Botturi at the “Africa Eco Race” from 7th to 19th of January. Both the team and the rider from Brescia (Italy) for this 2020 appointment to the exciting race won by the rider in 2019 with his dominant Yamaha.

Alex Botturi will be at the start of the raid with the brand new 450 WFR Yamaha, a version derived, with the japanese company beloved colors reminding of the legendary “Tènèrè” from 1986.

Experience, endurance, and high driving technique are the basis for success of such a demanding and selective competition. The race will start from Principality of Monaco and then will cover over 12 stages for more than 6500 km on the western side of Sahara’s sands towards the beaches of Dakar.

A challenge full of charm, but also of commitment for the driver and for the Angelo Caffi Squadra Corse, which, since the end of 2019, can boast the presence of the strong rider among the ranks of the harmonious team that entered the operational phase of the planned development.

- “It is a great pleasure to have been able to reach an agreement with the Angelo Caffi Squadra Corse, a reality where there is mutual esteem - says champion Botturi - The emotion is strong, facing this great adventure in which last year I’ve been the best rider, i hope to be able to be at the top of the rankings”-.

- "An electrifying experience for the whole team takes shape - declares Barbara Caffi team coordinator - a certainly intense commitment right from the preparation stages, but at the same time already rewarding since Botturi is a guarantee in such a difficult context. The esteem is mutual and we are honored to be able to be alongside the winner of the 2019 edition, an excellent driver, in addition to being from Brescia"-. 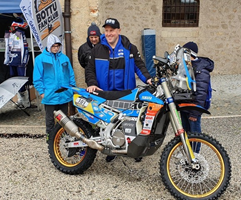